An edgy intro to graphs of interpersonal relationships

(CW: human sexuality, maths, LaTeX, spoilers for the Game of Thrones; based on a talk I gave with Michał Kaftanowicz) 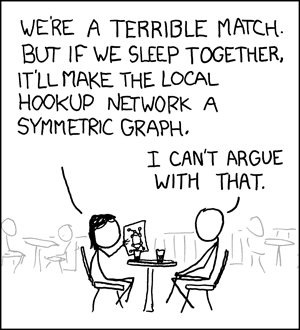 Everyone chuckles and you are left out. And it is not the only xkcd strip on the intersection of sex and graph theory (some are even more niche, dedicated to heavy math users, e.g. Hamiltonian).

So, what is a graph (also known as a network)? In short, it is a collection of dots (representing entities) with some of them being connected by lines. Or, as a diagram is worth a thousand equations: 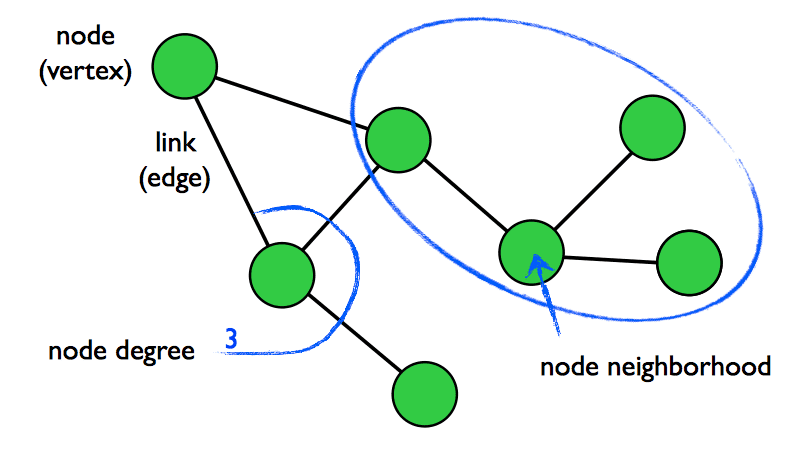 OK, so how does it relate to social relationships? Well, we can turn to the den of notworking, Facebook. Each node is a person, each link means that those people are Facebook friends. It excludes the main person, as they would be connected to everyone (giving no additional information, and a lot of clutter). 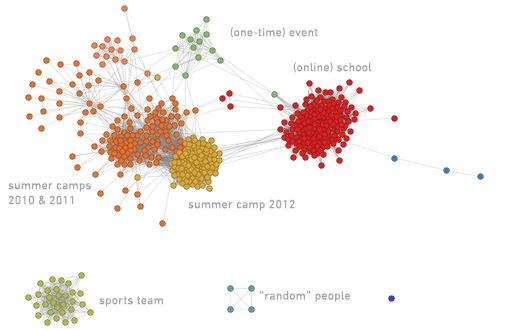 We can notice that nodes tend to cluster. Two people who have mutual friends are more likely to be friends. Maybe they have similar interests, or they met each other through the same groups and events. And here is mine: 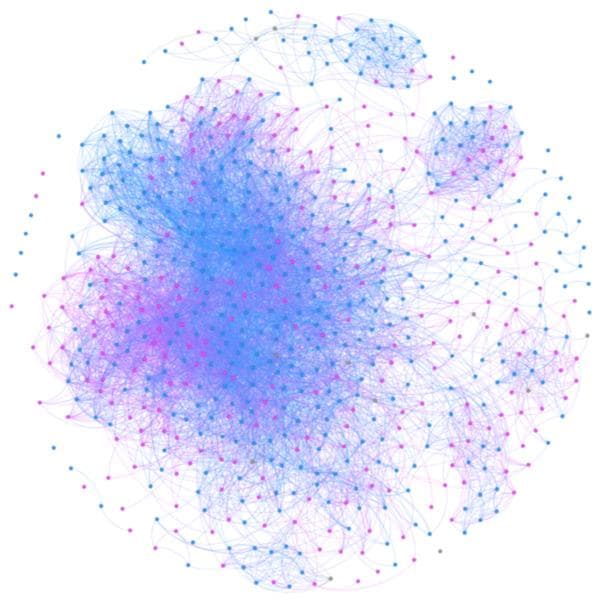 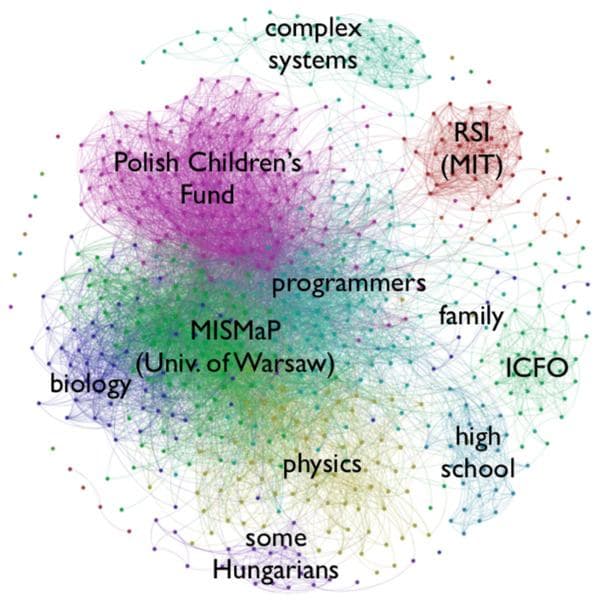 Various things start during high school (OK, for brainy kids they often start later; discussed and hopefully remedied in my Dating for Nerds). 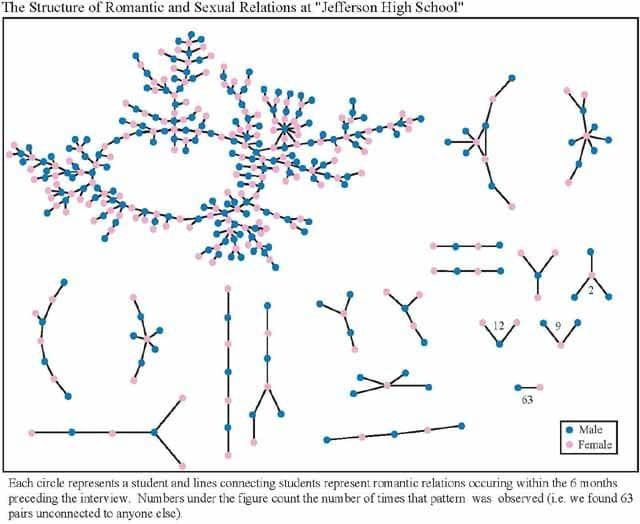 Here is an opposite pattern — links are not clustered (in fact, they tend to avoid each other). The authors were surprised by the low number of cycles (lines in a circle). One may guess that a cultural trope of “don’t date your friend’s ex” plays a role (and other things related to jealousy and bad breakups).

Instead of relationships, we can look at acts. To get into juicy topics, let’s look at pop culture — The Game of Thrones: 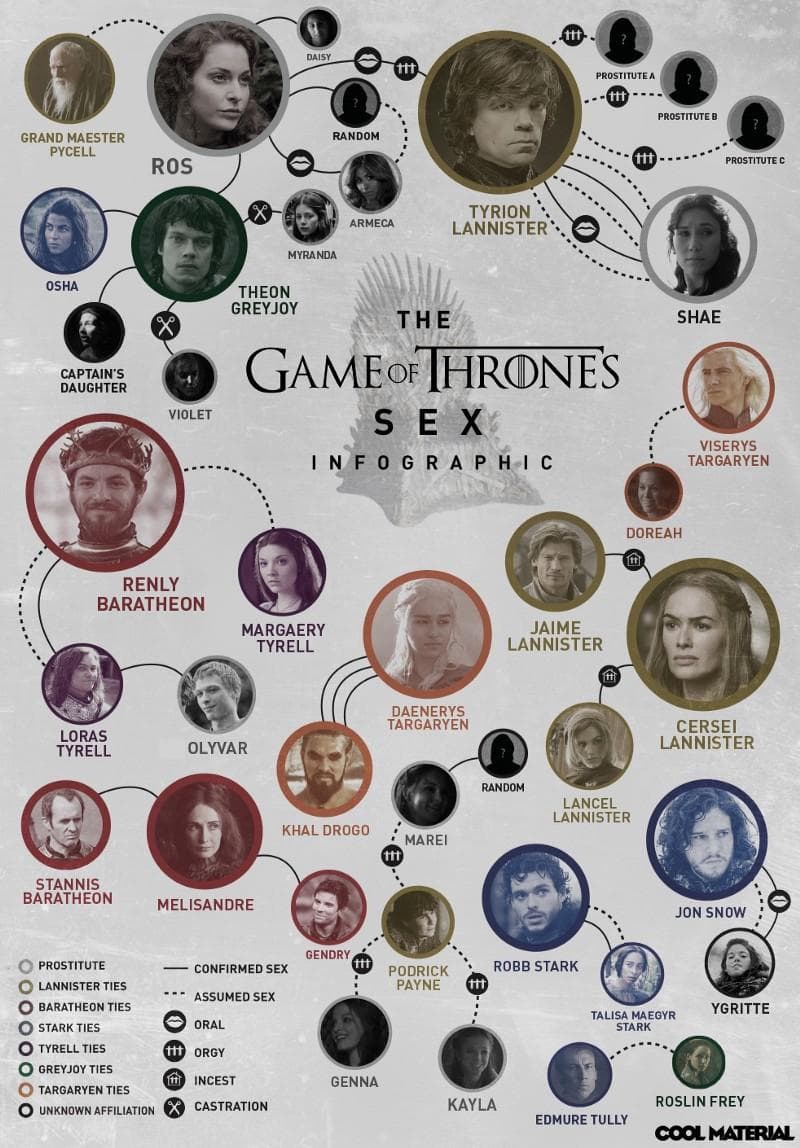 Confused by a complex set of ties? So is benzene: 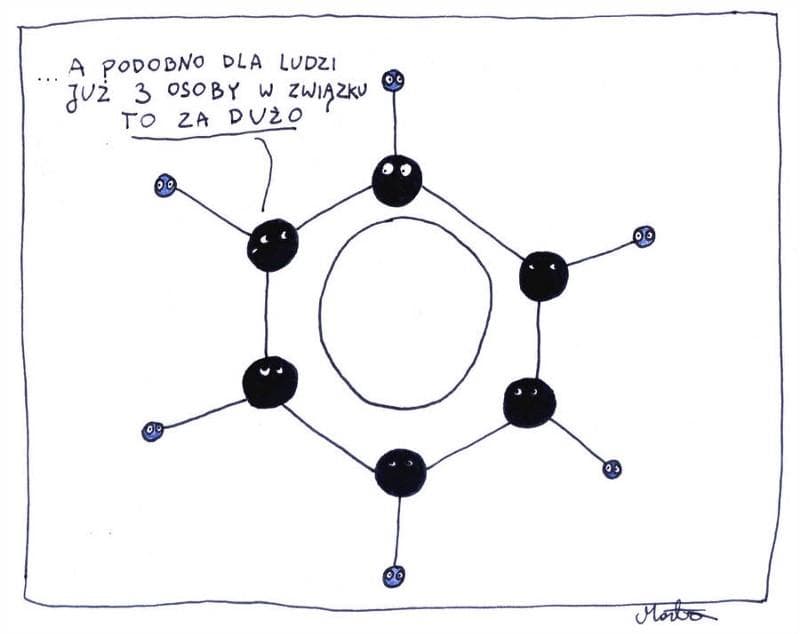 Yet, polyamory can be represented with a multigraph (pun totally indented): 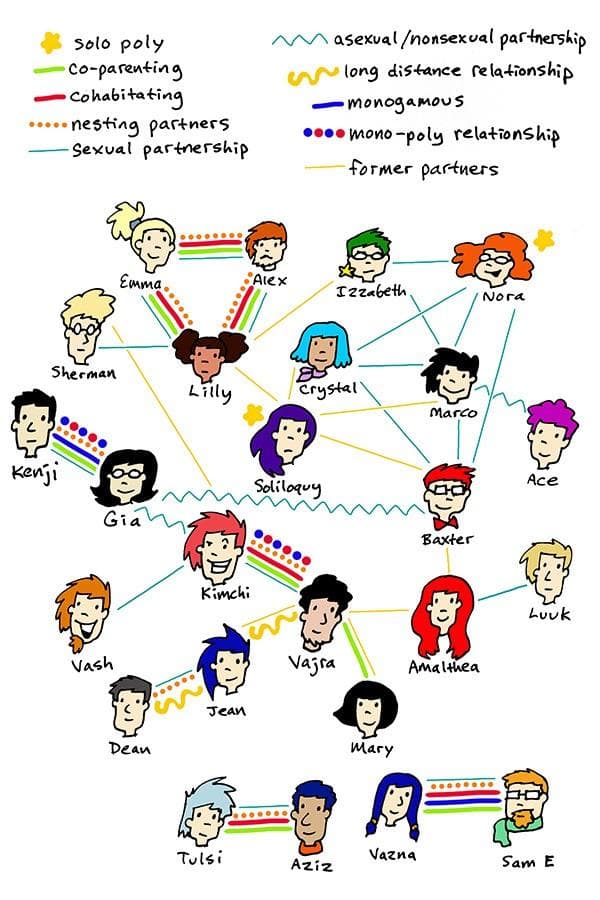 Do you think it is complicated? At least all these relationships are symmetric. Which may be not the general case:

Lost? Well, not anymore, here is a (directed) (multi)graph:

During the next party, draw a diagram of the participants. (Try ignoring questions whether you are high or drunk.)

Who is (or were) in a relationship? Any married couples? Or one-sided crushes? Are there any relatives? Colleagues? It is totally up to you what do you decide to include!

Alternatively, draw (if you are traditional) a family tree, or (if not so much) non-monogamous relationship chart. If you are a mathematician (let’s make it clear: you aren’t here to learn about graphs), you can draw your doctoral ancestors.

Or, from your favorite game, movie or TV series. There is a lot of drama there. Hopefully much more drama than in your personal life.

For drawing diagrams, any tool is a good tool. It can be a pen & pencil, or the venerable MS Paint. Some other resources that may be useful:

It used to be easy to download one’s graph of Facebook friends. Now it is much harder, and you need to resort to scraping, see: Tutorial: Plotting your Facebook friend network using NetworkX and python-louvain by Eliot Andres.

For a comprehensive, yet simple, introduction graphs for social networks I recommend a book Network Science by Albert-László Barabási, one of the key figures in complex systems. We just started with nodes & edges, and there is so much more interesting content.

If you are into the sociology of relationships —see Sex by Numbers: What Statistics Can Tell Us About Sexual Behaviour by David Spiegelhalter. While you won’t see many graphs (as networks; there are plenty of other charts), it does a stellar job of comparing statistics of various quality.

I have a soft spot for interactive graph viz in D3.js, see my projects:

Disclaimers, thanks, and adverts

All graphics belong to their creators. Do maths at your own risk.

While I know that sex does not sell, at least — not anymore (see: Teenagers are better behaved and less hedonistic nowadays — The Economist), I give it a try. 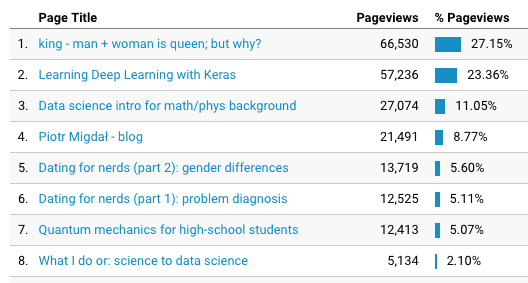