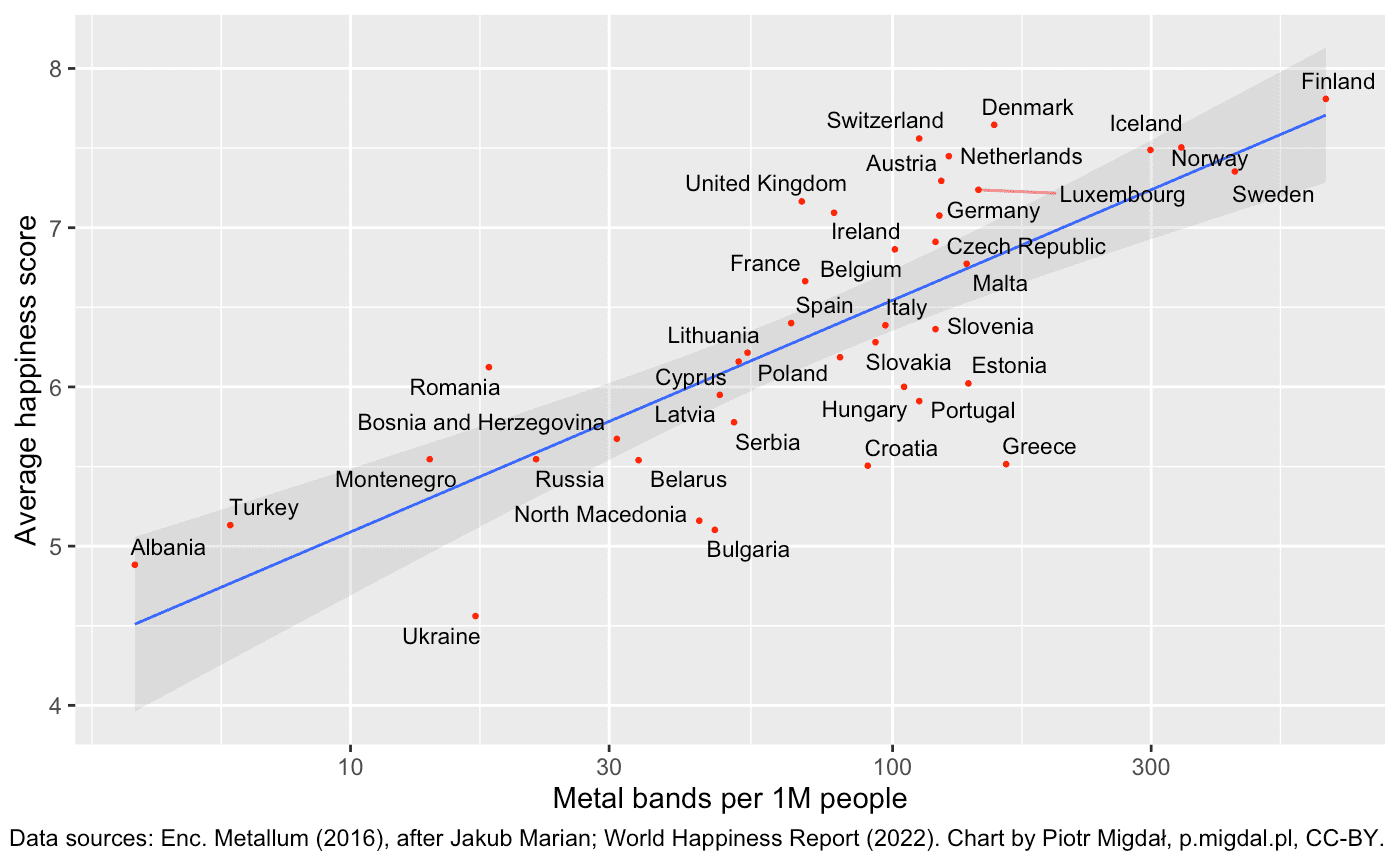 Do metal bands bring happiness or maybe does happiness bring metal bands? For clarification, its about music groups - not personal ornaments!

I got inspired by a map by Jakub Marian:

If you want to explore the density of metal bands, see an Interactive Map of Heavy Metal Bands By Country Per 100,000 People.

"Chocolate brings Nobel Prizes" is a reference to There's A Shocking Connection Between Eating More Chocolate And Winning The Nobel Prize. Ironically, this research article takes this correlation non-ironically. While not entirely implausible (chocolate contains a lot of healthy ingredients that improve cognitive functions), most likely this relationship diminishes a lot after controlling for GDP per capita. Sure, the Swiss have lovely chocolate and they eat a lot of it. But also live in one of the richest countries.

Correlation is not causation. I don't think there is a direct, causal link between metal bands and happiness. The title is intended to be humorous, not treated as real science! To the point that I didn't care that much that I combine data from 2016 (metal band count) and 2022 (happiness score).

I picked European countries on purpose - as it is a region (but not the only one!) in which metal music is a thing. Plus, to get all countries with a label, I had to reduce the dataset somehow.

In other countries most likely it correlated to other locally popular music or other creative activities. While possible, I would be rather surprised if the correlation goes only for metal music.

I guess that it is about conditions that are favorable for creative activities. That is - disposable income and safety net, tolerance and freedom of speech.

Also, all surveys measuring happiness have their shortcomings. The answer might depend on the meanings of words in a given language or culture. Especially as Finland, a country with the highest density of metal bands is the happiest country in the world but also has relatively high suicide rates. If anything, results may make more sense within a given country:

Generated in ggplot2. Since quite a few people asked about the code, I share it here to

geom_text_repel creates non-overlapping text labels see its documentation and is a drop-in replacement for geom_text. I have just found it and I will use it again a lot.

Full code with data as a GitHub Gist.