Perspective: capsaicin is a psychoactive substance

Capsaicin (8-methyl-N-vanillyl-6-nonenamide) is a substance found in chili peppers that causes a burning sensation. It binds to the vanilloid receptor subtype 1 (TRPV1), responsible for burning pain stimuli.

Isn’t calling it a psychoactive substance a stretch? Well, let’s look up a mainsteam definition as found on Wikipedia:

“A psychoactive drug, psychopharmaceutical, psychoactive agent, or psychotropic drug, is a chemical substance that changes functions of the nervous system and results in alterations in perception, mood, consciousness, cognition or behavior.”

While in principle anything we eat affects our neurous system, not everything acts direcly on neurotransmitters. In case of capsaicin it is both a direct interation (vanilloid receptors) and as secondary effects —related to adrenaline and endorphines.

In mild doses, it brings a sensation of excitement (most likely adrenaline). It is mouthwatering even when I just think about it. My favorite dose is when I have a delicate sweat on my forehead, but not yet involuntary tears.

In higher doses, there is one threshold effect, at least for some. I mean, the level where eyes become torrents of tears, face turns red. At least for me — few minutes afterward, there is a tingly, electric, pulsating sensation in teeth nerves. Then, while there is still some residual burning sensation remaining, the flush of endorphins gives this blissful, albeit a bit drunk, state (“Live is beautiful, I love you all, awesome…”). Essentially getting high on locally-produced painkillers.

As for some other psychoactive substances, there is tolerance growth. Hopefully, it does not carry to much risk. As far as I know, all adverse effects are related to the pain sensation rather than the substance itself (here, I didn’t check, though). So it safer than, say, caffeine. And since the cost is negligible, tolerance growth won’t wreck our budget either.

Oh, capsaicin is a mechanism to ward off mammals. But then appeared homo sapiens, the apex predator of pain fruits. 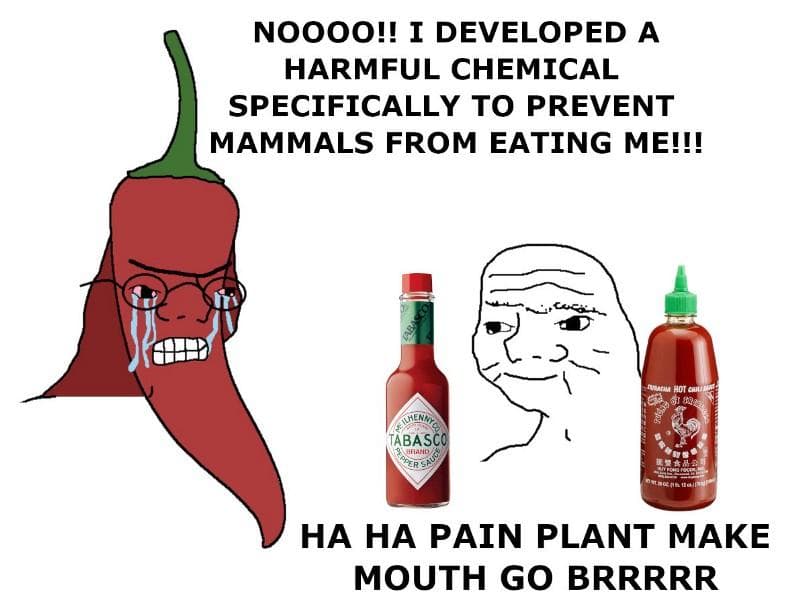